Vydia, a fast-growing technology company based in Holmdel, said it would close on Tuesday as part of the music industry’s bid to provoke accountability and change in the aftermath of the death of George Floyd.

Roy LaManna, chief executive officer, said he expected the day to be more than lip service. Instead, he said, employees would use the time to look at their own implicit racial bias and discuss how to expand opportunities for people of color.

“We are using it to have conversations on how we can be more active, help more, be better educated, allow people in the company to voice their concerns,” LaManna said. “We’re trying to use it to be mindful.” 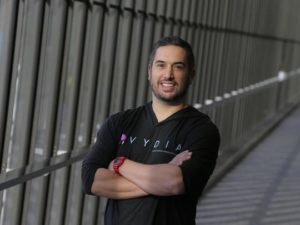 01/10/17 – Roy Lamanna, owner of Vydia, one of several companies that signed leases at Bell Works, talks about his company, which helps independent musicians get paid when their videos play on YouTube, in the Bell Works building in Holmdel, NJ. (Photo: Tanya Breen)

Vydia is part of a growing chorus of businesses and industry groups that are expressing their outrage over the death last week of Floyd, an African American, at the hands of a white police officer. They are speaking out more forcefully to a new generation of consumers that, surveys show, want to spend money with companies that are socially responsible.

Experts, however, say their messages need to be more than marketing ploys. They also should be accompanied with outreach to have an impact.

“I think what really matters is, what are they going to actually do about it?” said Christopher Hayes, an instructor at the school of Labor Studies and Employment Relations at Rutgers University.

Vydia, which has 60 employees, makes technology that helps entertainers make money from online videos. It has worked with musicians including Kanye West, Akon and Mr Eazi and has routinely been one of New Jersey’s fastest growing companies.

It decided to participate in Blackout Tuesday, an event organized by music industry officials and artists billed as a day to disconnect from business and reconnect with the community.

Other business executives have spoken out.

Brian Cornell, the chief executive officer of Target, the Minneapolis-based retailer that saw a store in its hometown looted, wrote: “The murder of George Floyd has unleashed the pent-up pain of years” and pledged that the company would rebuild and continue to invest in the community.

Closer to home, the New Jersey Technology Council on Monday said it was unveiling a new tagline: “In order to build a better future for all.”

“We must commit to giving a voice to the voiceless, to building tools that empower the powerless, to lending our resources to the oppressed, to standing up for our neighbors, to creating real opportunity for all,” Aaron Price, president and chief executive officer for the group, wrote to members.

As you go about your week check in with your Black friends and colleagues,” he said. “Be an ally. Ask how to help. Take the initiative to have uncomfortable conversations.”

Floyd’s death has sparked the most widespread protests in America since Martin Luther King Jr.’s assassination in 1968, with marches breaking out in New Jersey cities including Newark, Trenton, Long Branch, Asbury Park and Atlantic City.

Businesses are in a familiar position. They have been under pressure to sell their products to and hire people of color since the “don’t buy where you can’t work” campaigns of the 1930s and 1940s, said Walter Greason, an associate professor and chair of educational leadership at Monmouth University in West Long Branch.

Economic progress has been slow. The median income nationwide in 2018 was $61,937 for white households and $41,511 for black households, according to the U.S. Census Bureau.

And it was only two years ago that Starbucks came under fire after two black customers at a store in Philadelphia were arrested while waiting for a guest. The company closed for a day to train its employees on race and discrimination.

Greason’s advice: Companies should take advantage of low interest rates that the Federal Reserve Bank and lenders have rolled out to recover from the economic impact of the coronavirus to create sustainable, long-lasting jobs.

“The private sector has never really adapted to provide a clear ladder to the American Dream, particularly for these marginalized communities,” Greason said. “Education does it. The military does it….But when it comes to highest levels that generate real wealth, those opportunities remain severely restricted.”

Vydia might be on the right path. Two of its employees, Brittany Jacobs and Jenna Gaudio, last year launched a program with Asbury Park schools to send students to coding camp. 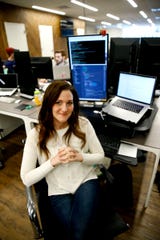 Brittany Jacobs, of Vydia at Bell Works in Holmdel, in a 2019 file photo. She is one of the shore entrepreneurs who are trying to connect with underprivileged students, encouraging them to go into the technology field. (Photo: Thomas P. Costello)

“We’ve got to take a day off and figure off how we as a company can utilize our position of power to help others, specifically in the black community,” LaManna said.

Michael L. Diamond is a business reporter who has been writing about the New Jersey economy for 20 years. He can be reached at [email protected]