A growing number of music creators are working independently and remotely as social distancing continues during the Covid-19 pandemic. And while many artists are delaying the release of new albums and feeling a pinch on their primary source of income with touring and in-person performances on pause, some of them still want to give back. Music technology company Vydia, used by the likes of Kanye West and Akon, is streamlining the donation process with the recent launch of a new charity arm that allows users to donate once or assign an ongoing select percentage of revenue streams to be paid out automatically on a monthly basis.

Grammy Award-nominated singer Akon says, “I think Vydia understands the value of supporting the communities around the labels and artists they empower. At Konvict Kulture, we’re aligned with this mission and are proud to make a contribution to such a worthy cause.”

Vydia’s first verified charity featured on the new royalty center is longstanding partner All Stars Project Inc., a national nonprofit founded in 1981 that uses a performance-based approach to help tens of thousands of inner-city youth and their families achieve success. The cause operates on $10 million in annual donations from thousands of individuals who also offer career guidance and workplace visits. Vydia has long supported the charity by donating equipment and hiring interns. Now funds donated by Vydia’s users will support quality after school activities for disadvantaged youth as part of the organization’s after school development programs.

“Vydia is one of All Stars Project of New Jersey’s most involved corporate partners,” says Shadae McDaniel, city leader of All Stars Project of New Jersey. “From the first workshop they led with youth in one of our afterschool development programs, Vydia has fully recognized the All Stars performance approach to development as a way of connecting young people from disenfranchised backgrounds to the mainstream, emboldening their self-worth, broadening their worldview, and creating environments for them to grow and succeed.”

McDaniel is proud to point out that one of Vydia’s newest employees is an All Stars Project graduate who was recently promoted to a creator relations associate role at the company. It is through such partnerships, she says, that kids are able to discover life-changing opportunities. 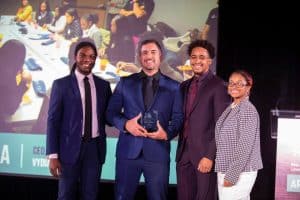 Vydia enjoyes a longstanding partnership with All Stars Project Inc., a national nonprofit founded in 1981 that uses a performance-based approach to help tens of thousands of inner-city youth and their families achieve success. Photo courtesy of Vydia

Co-founded by music industry veteran Roy LaManna in 2013, Vydia is an end-to-end platform that takes a technology-first approach to monetizing content and managing its own supply chain, distribution, data pipelines, complex rights management and payments. The business, ranked No. 372 on Inc 500’s 2017 list of America’s Fastest-Growing Companies, has forged strategic partnerships with leading digital service providers and applications including Spotify, Apple Music, TikTok, SoundCloud and Vevo as well as networks like YouTube, Facebook, BET, MTV and Music Choice.

LaManna, CEO of Vydia, is best known for his work amplifying multiple genres of music and quickly growing the careers of artists including Lil Pump, Post Malone, Jon Z and Drake Bell. He explains that top priority while working with his team to vet charities remains empowering the various music cultures that comprise his business.

“As a company, what we do on a charity side of things aligns with what we do on a business side of things,” says LaManna. “Hip Hop is the primary genre for music streaming, so we question how to give back to communities of color that we benefit from. We work to empower not only the music, but the people and the territory it comes from.”

The Vydia team regularly participates in charity-focused team building events, hosts educational workshops, leads mentorship programs and partners with other nonprofits like Girls Who Code to teach youth about the business side of music. Only charities with a potential for long-term partnership will be added to the royalty center, explains LaManna, who says that an artist donating just 1% of royalties would make a huge impact.

Some of the largest charitable donations are made by leading names in music including John Legend with his Show Me Campaign helping every child access a quality education, and Elton John, who was named MusiCares Person of the Year in 2000. Beyoncé was recipient of the 2020 BET Humanitarian Award for her charitable contributions, while Nicki Minaj continues to support multiple villages in India while helping pay her fans’ student loans.

“Artists and social activism have always gone hand in hand, and today, more than ever, it’s important for artists to support causes and initiatives they stand for,” says Charles Vergara, an artist manager who uses Vydia. “Vydia connects these dots and gives the artist the ability to give back directly and transparently.”

About Vydia
Vydia provides an end to end solution to empower the next generation of music creators, managers, and labels. Our cutting-edge technology provides the digital infrastructure for audio and video distribution, content protection, rights management, advanced payments, and data tracking from one easy-to-use application.

About  Andrea Zarczynski
Andrea is a professional, award-winning journalist with more than 15 years of experience writing about arts and entertainment for leading newspapers and magazines across the country. Her master’s degree studies in Media Management from The New School solidifies the foundation that she’s built in the latest practices and concepts for managing traditional and emergent media organizations and platforms.